Cryotherapy promises a chilled solution to a range of ailments 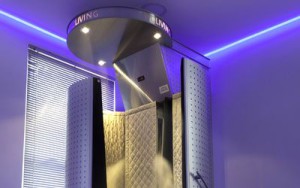 FOR the sake of their health, some people are using liquid nitrogen vapour to expose themselves to temperatures as low as -160°C.

“Cryotherapy was developed in 1978 by Dr Toshima Yamauchi of Japan for the treatment of rheumatoid arthritis, chronic pain, and inflammation,” says Eugene Pienaar, founder and CEO of CryoLiving in Cape Town, the first company to offer cryotherapy treatments in SA.

Cryotherapy (also referred to as cryostimulation) is not the same as normal icing of an injury. Ice baths cool down the body, slowing down the blood flow, enzyme activity and cellular metabolism. This makes it ideal for acute or new injuries. But cryotherapy, which stimulates only the top level of the skin (and is, therefore, nowhere near as unbearable as might be expected), has the opposite effect.

“Your body registers this extreme cold and wants to compensate by creating heat from within,” Pienaar says. “It does so by speeding up your cellular metabolism, which also has a profound effect on your blood flow.

“With the additional blood flow, you get additional oxygen and nutrients. This is great for areas that are known not to get good blood flow, like joints, tendons, and cartilage. And this makes it ideal for speeding up the recovery process.”

The whole-body cryotherapy process involves spending up to three minutes in a cryosauna. Cold receptors in the skin interpret the stimuli and communicate to the hypothalamus, an area of the brain responsible for thermal regulation.

“When you’re doing whole-body cryotherapy, you get a powerful anti-inflammatory effect,” Pienaar says. “You also get a release of beta-endorphins — your body’s natural morphine — which makes you feel fantastic and causes a powerful analgesic (pain-relieving) effect. And because it’s so cold, it reduces your nerve conduction velocity, which in itself reduces pain as well.”

Pienaar believes that the best results come from several sessions over a period of time. As the body adapts to the intense stimuli, it becomes less sensitive. This makes it ideal for people suffering from chronic pain and other long-term conditions.

“It’s an accumulative effect. That’s why we always like people coming on a regular basis. Instead of doing one session every week over a couple of months, rather come for two weeks and do several sessions. And every day, you’ll notice more of an impact because a series of sessions makes all the difference.”

Cryotherapy has a wide range of applications. These include sports recovery and improved performance, treating inflammatory diseases (such as rheumatoid arthritis, multiple sclerosis, and fibromyalgia), autoimmune diseases, depression, anxiety and more.

With celebrity supporters ranging from Cristiano Ronaldo and Daniel Craig to Jennifer Aniston, it’s not surprising that there have been 2-million treatments around the world.

“One thing that affects people most is inflammation,” says Pienaar, who first discovered cryotherapy while looking for a drug-free treatment for his intractable insomnia.

“Whether you’ve got a mild issue or a serious disease or are simply stressed, all of that is linked to inflammation. This is why cryotherapy has a wide reach in treating many different conditions and helps so many different types of situations.”

Since CryoLiving opened last October, many clients who tried it out of curiosity have become regulars. Pienaar singles out a man who has polymyalgia rheumatica, an inflammatory disorder that causes muscle pain and stiffness. He’s seen great results after about 10 exposures and doesn’t have to take his anti-inflammatory medication on the days he comes in for cryotherapy because the effect is the same.

“There are others with weight loss goals who have achieved a lot,” Pienaar says.

For the first 20 years of its existence, the main applications of cryotherapy were for treating inflammatory, auto-immune and rheumatic conditions. But in the past 10 years, particularly in Europe and the US, there’s been a big trend towards general wellbeing.

“With today’s lifestyles and diets, there’s something wrong with most of us, whether it’s chronic headaches, sore knees, or just stress,” Pienaar says. “We want to have a drive towards general wellness because everyone can benefit from this.”

by Eugene Yiga, January 14 2016, 06:08 (BDLive)
This entry was posted in Cryotherapy News. Bookmark the permalink.

How it works
Benefits of Cryotherapy
FAQs